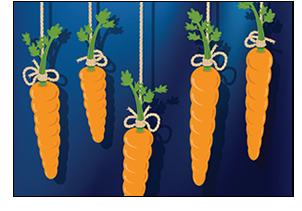 With the two major parties both having now announced their policies for youth unemployment it appears that there are very different approaches by both parties; with Labour offering a rather expensive carrot and the Conservatives looking at applying a rather firm stick.

Depending on your point of view, if immigration had been kept down to the levels promised before the election, perhaps the unemployment rate would have been much lower still, since immigrants have taken about 500,000 UK jobs over the last 12 months; and, if those jobs had been filled by the people already here and out of work, the unemployment rate would have been at least 2 percentage points lower at around 3-4% — a rate not seen since the ‘60s. Of course that assumes that those already living here would or could take those jobs — and that is a very big assumption.

The immigrants tend to go where there are employment hot spots, such as London, and much of the unemployment is elsewhere. It could be very well argued that without these immigrants the very satisfactory growth in the economy would not occur because of chronic labour shortages, meaning less government revenue and therefore more public spending cuts or higher taxes.

Labour has announced that it intends to guarantee “jobs” for everyone under the age of 24. They intend to do this by creating work places within both private and public sector employers by offering to pay part or all of the salary for these people. The thinking being that if there are enough vacancies then the jobs will be filled. Certainly this would impact massively on the headline number for youth unemployment. The young people will be in jobs and get into the discipline of what it is like to work. They will also gain life and work skills that prepare them for the future.

Idle hands do the devil’s work, as the old saying goes. Keeping our youth in employment also has the benefit of keeping them out of mischief and away from crime.

There, are however, two major drawbacks to this approach. The first is cost. To create 500,000 jobs on 12k per year (the minimum wage) would cost the exchequer £6bn. This is surely unaffordable. However, far more serious than this is whether this will bring down unemployment overall. I would suggest that it will not. If the Government pays private employers, and indeed some public sector employers, to take on these young people they will do the work that will probably have been done by other workers. In fact, they will be displacing other workers or indeed the money will be spent on paying employers to take on people they would have taken on anyway. In other words, it is a total waste of the Government’s money. Our money!  The Government’s record for both parties in job creation schemes is dire and I can see nothing in Ed Milliband’s proposals that appear to be addressing these key issues.

Iain Duncan Smith, for the Conservatives, appears to be coming at this problem from another angle. The strong implication in what he is saying is that all these young people not in education, employment or training (the so called “neets”) are just lazy and should have their benefits withdrawn unless they do 30 hours of community work.   This approach will have a lot of appeal to the electorate beyond the Daily Mail reading, mock Tudor, UKIP supporters. There is a real appetite now for not paying people for doing nothing and it has to be said that there are many unemployed people claiming benefits who should be in work. One only has to look at the vacancy levels of unskilled jobs in London to wonder what the unemployed people of London are doing. In times of low and falling unemployment this approach certainly does have some merit.

However, the big question for me is, what will this community work involve? Who will organise it? Again, the Government’s record, for both parties, is pretty dismal in this regard. We cannot ask the Job Centres to send these people out to old people’s houses with an instruction to cut their grass or clean their windows. Apart from probably terrifying the old folks, it is likely to be chaotic. Community service orders for criminal offences have been widely seen as a total failure and this would be the same but on a much greater scale. There is no detail in Duncan Smith’s plan as yet and I suspect we won’t see any.  As much as there is frustration that some people won’t work if they can get paid for doing nothing, there does not appear to be any real plan as to how this might be implemented. I am all the more fearful that some dodgy private contractors will charge the Government exorbitant fees for organising this work and then will totally mismanage the process, further damaging these young people’s desire and ability to take on real work.

And so, sadly, I would expect there to be very little change in unnecessarily high youth unemployment, whoever wins the election, since neither plan has been thought through.

So what could be done?

Neither party has acknowledged the real problem — too many people are coming out of school totally unprepared for the world of work. Bright children who come from families with a strong work ethic will have not have problems. It is not these young people who need help. It is those who come from damaged family backgrounds or from failing schools who find themselves going from classroom to Job Centre and, unless this is seriously addressed, this terrible social waste will continue. These will not be easy problems to solve but pretending that this problem doesn’t exist will only exacerbate it.

Nevertheless, there are some economic levers that the Government can use to assist.  The most significant of all would be the further removal of national insurance payments by young people on very low salaries. This has been introduced for the under 21s and should be extended further. This gives employers encouragement to engage these workers and, if the threshold is raised for employee contributions, will encourage more young people into work. As it is, many companies, especially retailers, will only recruit workers on short hours in order to avoid the employers NI payments. This will help but it will not solve the problem. A major effort in failing schools or schools in deprived areas is the only meaningful way of addressing this issue.  In the meantime, well at least the big parties are now seeing this problem as a major issue in which they can both offer the electorate different ideas.  It’s just a shame they haven’t got any good ones.