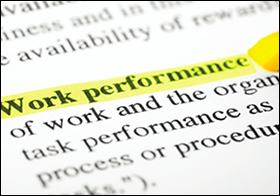 Performance problems raise a number of ethical and psychological issues and are possibly one of the most difficult people management issues managers have to face.

Of course some issues are clear cut. If someone is persistently rude to colleagues or always arriving late, this is a straightforward disciplinary issue to be dealt with by following a fair process. On the other hand, if you have a carpenter who can’t cut a piece of wood in a straight line, this is an ability issue.

The irony is that it is the latter who needs the more sensitive approach but is probably the most difficult to address. If an employee simply doesn’t have the ability to do the job, then all managers can do is lead them through what should be a humane process until they exit the employer. The disciplinary issue however, is just a question of enforcing the rules or standards onto someone who is perfectly capable of doing the job in the manner that is required.

The real issue however, is when managers use the wrong approach and try to discipline people on their ability issues or try to performance manage what are disciplinary issues — and, it is not always clear what is required.

Take a salesperson for example. If a salesperson is under performing, it is usually easy to measure. They are either making enough sales or they’re not. But there can be any number of reasons as to why they are not delivering. If someone’s personality is just not cut out for sales, using disciplinary procedures to try and beat them into selling more will simply make a bad situation worse.

Above all in sales, motivation to succeed is the underlying common denominator that leads to success or failure. The overriding competency for such a role is demonstrating self-confidence. There is nothing guaranteed to diminish self-confidence more than giving the individual a good telling off. What the managers need to do is ascertain whether the issue is a wilful refusal to do the job in the way that has been instructed, or is it that the person is simply not able to do the job. And, if it is the latter, is this something that can be addressed through further training and support or is it a lost cause? This is not easy and it is this, above all else, that defines what is a good manager/HR professional and what is a bad one.

The trouble is that the law, quite rightly, requires employers to follow procedures. This leads to managers using formal language in order to protect themselves in the event of a potential tribunal claim. In doing so, if they are trying to manage performance which is ability related, they in effect make it feel like discipline and the process appears to be punitive. The management of ability related issues requires managers to be extremely sensitive to how the issue is dealt with and the employee must be made to feel that this is a supportive process and not a good kicking for not doing well.

There are text books galore on this subject and it is beyond the remit of a short magazine article like this to get to the heart of the issue. However, as a broad guideline the starting point should be: avoid the jargon.  Don’t call people to “hearings”. A hearing sounds like you are in court, “up before the Beak.” Invite them for a chat instead.

To fulfil the requirement to allow them to have a companion, use language that suits the informal approach. Most important of all, at the “chat” make sure that the employee does most of the talking. Why do they think they are failing and what do they need to get the job right? It may be that the manager feels more confident in the employee’s ability than the employee themselves. In which case, say so.

If the employee is on another site, go and see them. Don’t summon them to an interview with you. Your invitation to the meeting will have to have a degree of formality in it but an email will do. Avoid headings like “Poor Performance Meeting”, or “Notice of Improvement Meeting”. The meaning must be clear but the language needs to be as friendly and as supportive as possible. To be sure, the only successful ability related meetings will be the ones where the employee feels uplifted and their confidence to do the job is enhanced. If they don’t, then eventual failure and exit are inevitable. Of course, if that was the goal anyway, then so be it. However, simply getting rid of people is rarely the most commercial approach. It is much better to get the existing employee productive rather than to have to start again.

Disciplinary meetings are a different issue, and here, sometimes the reverse is true.  Managers whine on about “not wishing to be punitive” to such an extent that the employee, who if they are wilfully disobeying instructions, believes that the manager is not serious about the issue and just carries on as before. At a disciplinary meeting the employee needs to be in no doubt that it is the employer’s belief they are being defied and that it will not be tolerated. This does require a much firmer response.

In both cases, both morally and legally, it must be clear what the consequences are if there is no improvement. However, good managers will make the very careful distinction between won’t do and can’t do and deliver their thoughts accordingly.

Peter Burgess is MD of Retail Human Resources Plc. He holds an MBA from The London Business School and is a Fellow of the CIPD.