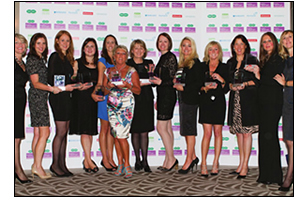 With many high profile female figures making headlines in the retail industry, it may sometimes seem as though the issue of gender equality is an unnecessary discussion.

There are of course many high-profile women in retail – some of the most famous including Jacqueline Gold of Ann Summers, Kate Swann of WH Smith and Angela Ahrendts of Burberry – but it is generally recognised that more needs to be done in order to make senior retail management truly diverse across the industry.

In order to highlight the women who are making waves in the industry, the largest UK organisation for women in business, everywoman, has launched a new initiative awarding retail ambassador status to nominated individuals who are capitalising on the opportunities retail offers and achieving career success.

The programme is spearheaded by Specsavers, an early advocate of female-friendly working practices. It recognises women of all ages, disciplines and positions within the industry as well as companies that are displaying best practice.

During the event, held earlier this month, some 200 senior women from the retail industry celebrated the professional success of the chosen retail ambassadors and discussed ways in which the industry needs to adapt to ensure it attracts the cream of the professional talent pool.

High profile attendees included the founder of Specsavers, Dame Mary Perkins; fashion designer Amanda Wakeley OBE; the newest addition to Dragon’s Den, Kelly Hoppen MBE; as well as leaders from programme partners Asda, Barclays, Pentland Group and Santander – organisations recognised for being diversity champions and supporters of women in business. They were joined by Baroness Tanni Grey-Thompson DBE, who spoke about the importance of role models who inspire young people across all walks of life.

Representing the pinnacle of retail success, the award for retail ambassador of the Year was presented by Dame Mary Perkins to Judith Batchelar, director of brand at Sainsbury’s for her pioneering approach to sustainability in one of the UK’s largest supermarkets.

Maxine Benson MBE, co-founder of everywoman, said: “It is a business imperative to unlock the talents of all women in the workplace. Our twelve 2013 retail ambassadors are all role models who are playing a vital part in unlocking the potential of other women in their orbit: friends, colleagues, the young girl on work experience, the customer considering a return to work after a career break. When they experience the passion our ambassadors have for their work, see the success they are achieving, they will know just how rewarding a career in retail can be. That’s why the role these 12 women hold as Specsavers everywoman in Retail ambassadors is so important.”

Melanie Armstrong
Head of music & merchandise at HMV Retail Ltd having worked her way up from being a sales assistant.

Ellie Doohan
Chief compliance and ethics officer – EMEA and Canada, Walmart International and a champion of supporting women in the workplace.

Martha Ferguson
Owner/director of Papylon, a contemporary kitchenware store, set up when she was just 26.

Clare Kirkby
Store manager at Hobbs, credited with leading the branch of the fashion retail store to be one of the top five in the country.

Pauline Lauder
Clothing and footwear trading director at Shop Direct Group, who leads a team of 180 and is an advocate of flexible working to support women.

Deryane Tadd
Director of The Dressing Room boutique in St Albans, who climbed the retail career ladder before successfully going it alone.

Elaine Wrigley
Head of retail at New Look , responsible for a team of regional managers, 182 stores and a sales volume of £450m.

Judith Batchelar
Director of brand at Sainsbury’s and winner of the retail ambassador of the Year.