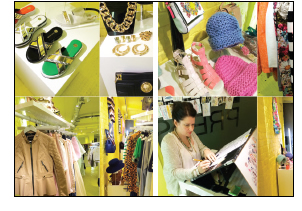 Known for supporting and nurturing new design talent, not least through its work with the British Fashion Council, the River Island brand was formed in 1988 from the combination of the Chelsea Girl and Concept Man chains. Having retained its reputation for being at the forefront of young fashion, it has just launched its latest collaboration with pop superstar Rihanna. We take a look behind the scenes at one of the UK’s most iconic high street fashion retailers.

In the early 80s, the brand Chelsea Girl was to teenagers and young women what Topshop is today, offering the latest trend-led fashion pieces at affordable prices. At the time, fast fashion was a new concept of which Chelsea Girl was at the helm, using bold campaigns in which the chain integrated its fashions with the latest pop music to create an iconic young lifestyle brand.

As its success grew, in 1988 the company was merged with menswear chain Concept Man to form a whole new name on the high street with a more internationally wide-ranging appeal – River Island.

Now, with over 60 years of high street fashion experience, River Island has 300 stores worldwide, including locations in Russia, Holland, Poland, Belgium, the Middle East and the Far East.

Despite its numerous successes, however, River Island unapologetically sticks to its roots, continuing to design everything in-house using one of the largest design teams on the high street.

The company is also still in the hands of the family which founded it in 1948, an increasingly rare circumstance for a successful fashion chain these days and resulting in many freedoms that would not otherwise be afforded to the management.

This lack of red tape and the ability to take key business decisions with both speed and quality has led to a versatile and adaptable employee culture, high in creative energy.

It was this creativity which not only inspired the firm’s enormously successful partnership with pop star Rihanna, now into its final collection, but also the decision in 2011 to revive the Chelsea Girl name as a vintage-inspired collection in selected stores and online, nicely summing up the company’s history of innovation on the high street whilst remaining loyal to the principles which first gave it such success.

The fusion of pop culture and fashion is also still very much alive and kicking at the brand. For six years, River Island was the sponsor for Graduate Fashion Week before creating its own initiative, the FASH/ON FILM festival as part of London Fashion Week. Launched in 2012, together with the British Fashion Council, to support up and coming designers and film makers in fashion.

The culture of innovation in its products also applies to River Island’s employee culture. The company nurtures creativity and enthusiasm in its workforce and has a reputation for holding onto its talent.

Employees are encouraged to apply for internal vacancies with the rationale that to progress, someone who knows the company well plays a “vital role in moving the business forward”. Throughout internal applications, River Island’s recruitment team offers feedback at every stage of the application to help the employee’s personal development.

Meanwhile, staff also benefit from flexible shifts with a range of contracts depending on the employee’s situation and commitments, further cementing the company's reputation as being far more than just your average 9-5 employer.

Tips for applying to River Island

One of the key benefits of working for, River Island of which you might not have heard is that the brand works hard to retain the best talent, so there are huge opportunities for training and internal progression.

It may be a fast-paced environment, but the rewards are more than equal to the pressure.

The benefits for River Island include a generous staff discount as well as a subsidised gym and restaurant at its West London head office and season ticket loans for HO staff.

The online application process is quick and easy and your application will be anonymous until you decide to apply. There are three straightforward stages to complete and throughout each stage you’ll get feedback about how well you fit the role.

Once you’ve found a vacancy on retailappointment.co.uk, just click on the ‘apply’ button to start the application process. It only takes about 20 minutes, so if you like the sound of working for River Island, start your search now by clicking here.