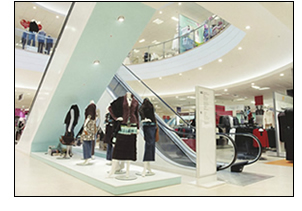 As Debenhams prepares for its 200th birthday this Christmas, we take a look back at its colourful past and find out what the rest of 2013 and beyond holds for this British icon.

When draper William Clark first established his store at 44 Wigmore Street (which would soon become known as Clark & Debenham, after the two partners), the American War of Independence was still in full swing and James Cook was on his last great voyage to discover the Northwest Passage. After a brief spell as Debenham & Freebody, the enlarged group was finally incorporated as Debenhams Ltd in 1905.

Continuing its expansion in the first half of the twentieth century the business merged with Marshall & Snellgrove, acquiring its Oxford Street location and in 1920 the group purchased iconic Knightsbridge retailer Harvey Nichols.

By 1950, Debenhams was the largest department store group in the UK, owning 84 companies and 110 stores. It continued to grow and in 1966 central buying was introduced for the first time.

After being acquired by the Burton Group in 1985 and subsequently demerged in 1998, the group came under the leadership of Belinda Earl who was appointed CEO in 2000. Throughout the recession and despite many commentators slamming the department store model as outdated, the group held fast, bolstered by the brand’s “four pillar” strategy of focusing on its core UK market, delivering a compelling customer service proposition, increasing its multi-channel offering and expanding internationally.

Currently, Debenhams is preparing for its 200th anniversary with a refurbishment of its flagship store in Oxford Street, London.

The work involves the installation of 180,000 aluminium tiles on the exterior of the building that will appear to ripple with the wind.

An existing floor will also be converted to become a trading floor and three new restaurants will be opened. The company took a £2 million hit to its profits in the year to the end of August due to the revamp, but Debenhams sees store modernisations including the Oxford Street branch as key to its future success.

In addition, the company is releasing a showcase range from its successful Designers at Debenhams portfolio of brands. The collection includes a floor length gold sequin dress from Star by Julien Macdonald, a luxury leather coat from the Betty Jackson Black range and a collection of premium leather handbags and purses.

Julien Macdonald commented: "Congratulations Debenhams on your 200 year anniversary! I have loved every minute of being a Designer at Debenhams over the past ten years. It has been an exciting, interesting and glamorous experience.”

Since its early days, Debenhams’ workforce has expanded to a team of over 25,000 individuals within a creative and innovative head office as well as store and area management who lead a team who have a reputation of delivering some of the best customer service on the high street.

Find out what jobs Debenhams are currently recruiting for on retailappointment.co.uk

Tips for applying to Debenhams

• At Debenhams, everything’s about quality, so make sure your application is too. They want to know why you’re perfect for the role and why they should invite you for interview. Tailor your application to do exactly that.

• Attention to detail brings out the very best in Debenhams' products and it’s a skill its people use every day. Show them you’ve got it too by checking your spelling and grammar.

• Be prepared. Read through the job description and your application and make sure you know your CV inside out. Think about the questions they are likely to ask and prepare your answers. A few bullet points can help prompt you during the interview.

• If you believe you’re a good team player, tell them why, citing examples from your previous experience.

• Be you! We know interviews can be intimidating, but remember that Debenhams values all their people for the individuality they bring, so give them a flavour of your personality.

• Debenhams is always looking to the future. They will want to know you’re progressive too, so let them know about your career aspirations, what you want to do, and what you have done in the past to further your career.

• If you attend a recruitment event, you will take part in a group exercise. They’re a great way for Debenhams to see whether you can fit into their culture of teamwork so show them what you’ve got!

• Keep calm and be yourself. Debenhams will employ you for your personality and individuality as much as your experience. Also bear in mind that if you‘d like feedback on your performance at either the interview or recruitment events, they’ll be very happy to provide it for you. All you’ve got to do is ask.

View the downloadable version of this article here