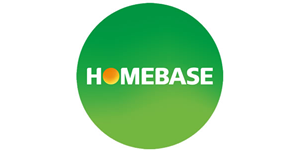 Homebase is a leading home enhancement retailer selling over 38,000 products for the home and garden. It has more than 340 large, out-of-town stores throughout the UK and Republic of Ireland serving around 64 million customers a year, and a growing internet offering at www.homebase.co.uk. In the financial year to February 2012, Homebase sales were £1.5 billion and it employed some 19,000 people across the business.

342 stores across the United Kingdom and Republic of Ireland.

Homebase was founded by Sainsbury's supermarket chain and Belgian retailer GB-Inno-BM in 1979 as Sainsbury's Homebase, to bring supermarket-style layout to the British DIY market.

Its first store was in Croydon, opening on Purley Way on 3 March 1981.