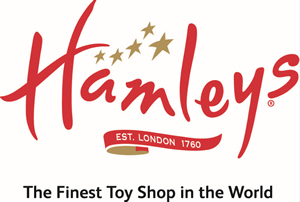 Hamleys is the oldest toy shop in the world and one of the world's best-known retailers of toys. Its flagship store in London is across 7 floors with more than 50,000 toys. Located on Regent Street, it is considered one of the city's major tourist attractions, receiving around five million visitors per year. The chain has six other outlets in the United Kingdom and others worldwide.

The company was owned by Baugur Group, which purchased Hamleys in 2003 for £58.7 million. When Baugur collapsed, control switched to the Icelandic nationalised bank Landsbanki, until it was sold to Groupe Ludendo.

Unlike many companies using possessive names, Hamleys intentionally forgoes the use of an apostrophe in its name.

In 1938, Queen Mary, the consort of King George V, gave Hamleys a royal warrant, then in 1955, Queen Elizabeth II gave the company a second royal warrant as a "toys and sports merchant".

During the Second World War, the Regent Street store was bombed five times.