Some of the best retail April Fools stories of 2015

This “new service”, exclusive to Prime members, offers customers a chance to re-order the products they use every day with just one click of a button.

When you’re running low on your favourite products, simply press your Dash Button and Amazon quickly delivers household favorites at the same prices offered on Amazon.com, so you can skip the last-minute trip to the store.
To be honest, we’re not sure if this even is an April fool’s story…It would be really handy!

What do you think?

Love it or hate it, at least you can always see it. But not any more, according to a prank from the yeast extract spread's makers on Twitter this morning. Instead of the usual sticky black toast-topper, customers were tempted with a near-invisible version of the iconic spread. Marmite Clear quickly had fans interested. It’s almost a shame it’s an April fool’s stunt.

Costa and a Kip

Coffee chain Costa announced a rather attractive concept of Costa and a Kip - a new service that lets customers have a power nap when they hit the afternoon slump, thanks to a super-comfortable “Ostrich Pillow” which allows people to just doze off at their table.

House of Fraser horsing around

House of Fraser have apparently got an entrant in the Grand National - introducing Horse of Fraser on its Twitter account. Although the department store is still waiting for some form from Clare Balding…

Tesco took to social media to announce a world first with its bouncy aisles trial. No more stretching for the top shelf - the Spring Stepper Shelf Solutions will be a “practical and fun solution” to shoppers who can’t quite reach the highest products in the store.

The bouncy trampoline-like floors will run parallel to the shelves, with a solid floor in the middle of the floor for people to wheel their trollies in comfort and safety. 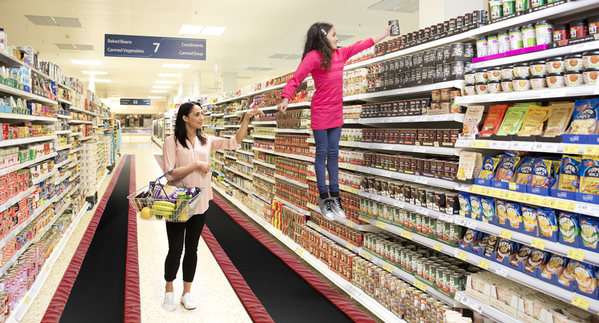 In another April fool’s story we sort of wish were true, Pizza Hut announced the "introduction of scratch and sniff menus". Instead of traditional descriptions of their pizzas and pastas, the chain claims that customers can now choose their favourite items by following their noses..